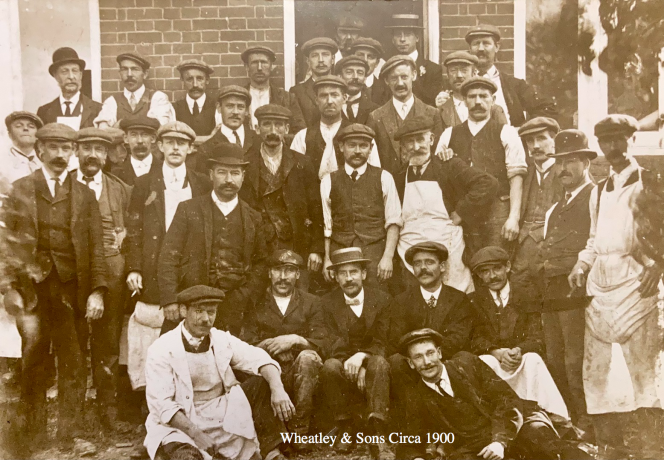 Jesse Wheatley started in business as a builder/decorator in the year 1850 in the neighbouring town of Walton On Thames. He came to Molesey in 1856 and offices were opened in Bridge Road, with workshops and stables in Arnison Road.

The coming of the railway to close by Hampton Court resulted in a great demand for housing in the locality and in the following years as the business grew houses were built in much of East Molesey, including Beauchamp Road, Palace Road, Wolsey Road, Matham Road, and Arnison Road etc.

By this time Jesse Wheatley had been joined by his four sons and a second office was opened in Esher High Street.

Wheatley & Sons have always had a close association with the Church, being involved in the building of St. Pauls Church Spire in the late nineteenth century. The Church pulpit was given by Jesse Wheatley in memory of his Wife.

In 1858 Jesse Wheatley was a member of the Parish Committee which met at the Bell Inn to discuss the setting up of a Church School in the Parish, the two schools were built in Park Road, and School Road.

Jesse Wheatley died at the age of 82 and is buried in East Molesey Church Yard.

The Company is possibly the oldest business in Molesey and whilst the offices were closed in Bridge Road and Esher, the office was relocated in 1935 to the Yard in Arnison Road where they remained until 2011.

Most of the properties in Arnison Road were built around the site and that of Strawberry Villa (now demolished) from the late nineteenth century with the remaining more modern houses being erected in the late 1920s.

Sadly the last of the Wheatley building family, Bertrum Wheatley, died in 1969, and the business has continued with Directors and Management who attempt to maintain the high standards set by their predecessors. Much of the work is on modernization and repairs to some of the many houses built by the founders.

Company Director Allen Palmer joined Mr Wheatley in 1956 where he remained until stepping back from the day to daay running of the business in 2018 after 62 years. Maintaining the founding principals of the family business, Allen's daughter Abigail took over as the Managing Director of the company where along with her Mother Jackie and Andy Simms they continue to operate the business to the highest standard. Andy joined in 1982 and is the Works Manager/Company Secretary and looked at as a second son to the Palmer's.

Most of the current workforce served their Apprenticeships with the Company, Wheatley & Sons being one of the few Building Companies still offering apprenticeships.

The Company motto is “no Job too small”, undertaking jobs such as lock repairs, tap washers, blocked drains etc. After 161 years in Arnison Road, the time came to move on to more modern premises at 74 High Street, West Molesey. The old workshops and office have been demolished and replaced with housing more in keeping with the remainder of the surrounding properties and sits in the aptly named Wheatley Mews.